Few months ago a colleague of mine pointed me to Rust.

It took some time, but it now has superseded D as my favorite programming language. Even not as mature as D, I especially love the error handling concept.

And to my knowledge it is the only language that can describe lifetime of objects. Not even Ada can do this.

It feels like this language really scales, i.e. you can use it for small embedded projects as well as for the really big backend server applications. Go, give it a try!

In the recent weeks I had the chance to attend some automotive conferences on functional safety.

Functional safety is defined as freedom from unreasonable risk resulting from malfunctioning of electronical systems. The important point here is: malfunctioning

A lot of presentations of the conferences, however, were about highly automated and autonomous driving and how to be sure that even the well working system is safe enough.

They even have a term for this: safety of the intended function SOTIF. There will be an ISO PAS 21448 to have some systematics for the people in the automotive world.

Interestingly both topics are discussed by almost the same people. I am afraid, because some are not aware of the difference…

We all know that reading books can be dangerous, but this is not why software libraries are evil 😉

There is a different reason for this.

Let’s assume we have module we like to create a library from:

The module libx provides a structure X and a function doX. However, they behave both different depending on the compiled version (you can think of B as e.g. a debug version).

Now to the program using the library:

You could argue that the problem is the multi-version library. However, this issue is even worse for compiler options. Just think about the options defining the layout of structures in memory, i.e. for aligning and padding of the members.

I want you to be able to sleep at night, so don’t even start thinking about dynamic link libraries 😉

Summary: If you want a program to be working, do not use pre-compiled libraries. Always compile with the same compiler in one run and statically link every object together.

In a language with functional programming elements (like D), you could do the following:

However, for large inputArrays and large k, this takes an unreasonable time, since for each tuple the sum is calculated individually again.

This speeds up things a lot.

You may also like to have a look a this question on stackoverflow.com.

On the weekend I discovered codefights.com.

At work, I have to read a lot of code, but I rarely have the chance to do some of the creative coding work myself. This is a welcome activity in the evening then…

I am not much into the competition thing, but this is a nice opportunity to improve my D skills.

I just had to watch a recent talk by Scott Meyers.

When developing safety-related software or systems you need two things: argument and evidence. The goal structuring notation (GSN) is widely accepted to bring these two things together.

Actually, there also was www.goalstructuringnotation.info providing a complete specification of GSN but it currently seems to be broken.

I had to provide some arguments and evidence for a very special use-case recently to a customer. So wrote a litte script to easily create and modify my argumentation.

This is an example result: 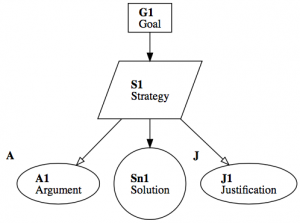 I put my little script on github. It takes the arguments in a YAML file as input and outputs a DOT file that can be rendered using Graphviz.

My favorite programming language that I would use these days for creating embedded or large scale software is D.

C++ brings more libraries and tool support and increased in type safety tremendously with C++11 and later. However, syntax (for newer useful features) and required usage of the preprocessor are aweful.

I tried learning D by implementing the chacha algorithm. You can find it on my github site.

Today I came across a strange compiler warning. All major compilers seem to have implemented the warning.

The only reasonable explanation I found was this one:

const static or static const or what?

In discussions about software safety you often end up  arguing about something that is actually about a fault model of software.

The most obvious is logic faults: the software functionally does not what it is intended to do. We could also call this fault class algorithmic faults. As examples I see faults as division by zero, uninitialized variables and faults in e.g. state machines.

The next and very bad ones are memory management faults. That are wild pointers (pointing to something invalid), dangling pointers (usage after they point to something valid), buffer overflows and misunderstanding about memory ownership.

Recently, we also stumbled over an issue created by integer promotion that was not obvious. This represents another class of potential issues. It may be specific to C, however I guess an even more type safe language may have the same problems, e.g. when casting types.

Faults that should not be considered in discussions on software faults are reliance on implementation-specific behavior (they can be prevented by static code analysis or better: don’t do it!) or hardware faults (e.g. single event upsets).  Software can detect such hardware faults, but they are not caused by software.

Maybe I one time add a page here to describe those faults in detail and think more about completeness.